My favourite memories of camp will always be the people My Camp America journey started off in 2015 like most other school leavers – meaning coming to the end of college and having no set idea of where I wanted my life to go from there!

Most of my friends were heading straight into Uni, which I’m sure works for some people, but the fear of starting to study something only to figure out I had no passion for it put me off that plan big time. I started to think about what I wanted to do with my life and the thought of travelling popped up and I couldn’t shake it.

At 18, I’d really only ever travelled for sport or family holidays to Aussie and the Islands, so the more I thought about seeing more of the world by myself the more the idea appealed to me, I just didn’t know how to go about it. A quick google, and up pops Camp America!

The idea of having a group of people behind me to help plan my first big ‘solo’ adventure, who would look out for my best interests and even hook me up with a gig working at a summer camp in America seemed way too easy to be real, but a week of research into the Camp program and I was hooked! The team in the NZ office made me feel so prepared and quickly changed my apprehension to absolute excitement for the adventure to come, and it’s 100% because of their level of care that I stuck with Camp America instead of finding a different agency. Even the hiring process couldn’t have been easier due to the help of my interviewer and the office crew!

After having one camp reach out to me, that after some googling I felt wasn’t quite for me, I was emailed by the NJY camps group and hey presto – I now had a job at an all-girls Orthodox Jewish camp in Pennsylvania (Camp Shoshanim)! While I’ve never had much prejudice in my life, I’d also never really had a massive religious input but I figured the best way to learn and understand something so foreign to me was to live amongst it for a time and be immersed in it.

I wasn’t feeling anything but ready for some fun by the time it came to a reality and my friends and family were waving me off in the airport. I’d been put in contact with some other Kiwi’s heading to the same camp and couldn’t wait to meet them (four years on and we still catch up around NZ and have had a few of the UK crew come visit us too!). Like most Kiwi’s, I was hired as a lifeguard and swim instructor, and having a background in both I was so stocked to be able to spend my summer doing something I knew I loved!

Arriving in New York was a cultural experience in itself for me coming from a small rural community!

But having the option to stay in the Camp America hotel, being able to get a sense of who else was intrigued at the thought of working at a camp on the other side of the world with a bunch of strangers then becoming fast friends with them all, ticking off that first outrageous Walmart shop and get my bearings a bit before heading to camp was a god send. My first two weeks of camp was spent at another NJY camp for training which I never thought would be as fun as it was! Imagine being at a camp and instead of kids it’s just a bunch of adults running around having fun and learning the American equivalent of what they love to do at home!

Fast forward an amazing 8 weeks at my own camp – not being forced into it in any means but gaining such an appreciation of the Orthodox way of life and so much more understanding as to what that entails that I had before, making life long friends and just having a great time all round, it’s safe to say going to camp was the best decision I’ve ever made!

My first year at camp was such a hit on all fronts that after having some time to consider how I want my life to be lived I went travelling further (with International Working Holidays to volunteer in Africa!) then got a diploma in Adventure Tourism and have made a career out of adventuring!

Working seasonally in tourism, I wasn’t sure what to do with myself last winter, and remembering how much fun I had in 2015 – it was pretty easy to wrap my mind around doing another stint at camp! Having a curiosity at how other camps operate though, I decided to branch out and was hired by a co-ed privately owned Jewish camp in North Carolina (Blue Star Camps).

Having a background and passion for the outdoors as a guide, lifeguarding and swimming it was fairly easy to get my application under wraps and I was stocked to be hired as part of camps outdoor team! Yet, as life sometimes works in mysterious ways, my role ended up being completely flipped on its head as the camp needed someone to slot into the role of director of Ancient Arts, and having an uncanny sense to take any opportunity life gives me out of my known comfort zone and make it my own, I happily agreed. I had no idea what this would entail, and couldn’t describe it to people if I tried before I got to camp – I genuinely had no past experience in arts & crafts (working with blow torches, whittling knives, re-bars, craft saws on bamboo, gourds, leather and wood) AT ALL – I’m talking even year 10 art was a stretch for me, yet I had such an incredible summer doing something totally new to me! This was probably my biggest challenge at camp – but I wouldn’t have traded the experience for the world (I mean, after training up the new girl in the role this year I can “technically” say I’ve helped train someone in the Ancient Arts which I think sounds pretttyyyy cool).

Going back to camp this year though, I was popped back into the outdoor instructor team and couldn’t have had a better time at camp as a returner! This year was easily my favourite year and the lessons I gained from how to work alongside a diverse group, to adapt to new situations, be both a leader and a follower when needed and just working with the campers in general are skills I think anyone could do with in their day to day life and I’m forever grateful to camp for inadvertently teaching them. My favourite memories of camp though will always be the people – it’s the life long friends you make along the way that keep staff returning year after year, and creating such strong bonds in a couple of months is something I’ll never take for granted.

There are so many things I believe people get out of doing something like camp that it’s hard to try and put in words. While it definitely is one of those things
where ‘you get what you give’ in terms of how much you throw yourself into every crazy situation and the fun you can make for yourself, the overall experience and friends I’ve made from camp are something I’ll always be grateful for.

To find out more about Liana Smith’s projects check out

We help you sort your flights, visa and more

You’ll need about $3800 for flights, fees, visa, and a little spending money – but here’s the breakdown

Get started on your online application today 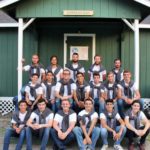 I heard from friends that their peers had gone overseas 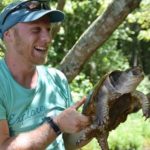 Nine years at camp and counting! Camp America is addictive… it calls me back every year!

Hey, my name is Oliver and I thought, why not